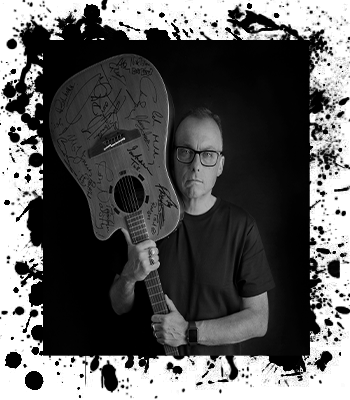 Lou Brutus is a true renaissance man…  he is the award-winning host of the nationally syndicated radio programs “hardDrive” which airs on weekends and is in its 20th year on the air, and “hardDrive XL” which is broadcast 5-nights a week and is now in its 10th year.   Between those two shows, Lou is heard in nearly 120 markets nationwide.    He was chosen to be the host of hardDrive because his interview skills were good enough to keep the likes of Maynard Keenan of tool and the legendary Frank Zappa talking up a storm on live radio!   He’s an accomplished photographer of both rock bands and of Major League Baseball… He’s also working on some books, is a voting member of NARAS  for the Grammys, but most of all he’s got radio in his bloodstream… he is the one and only Lou Brutus!

The year was 1996. The date was the 4th day of July. The tattered remnants of the hard music community of these once proud United States were clinging to shattered dreams and the nearly forgotten remnants of glory in a rock radio world that had seemingly forgotten how to play things that didn’t suck.

Since its birth, hardDrive has become a respected and influential extreme rock (for those you who don’t know what this is, suffice to say it’s a cross between hard rock and modern rock) radio show in broadcast history. Hosted since its inception by the award winning Lou Brutus, the show has constantly defined what new hard music is all about. hardDrive has given listeners across the continental United States and Alaska their first taste of bands including Disturbed, Godsmack, Rammstein, Slipknot and tool, among hundreds of others. Week after week, hardDrive interviews virtually every extreme musician that exists. ‘Nuff said. As long as hardDrive is on the air, U.S. citizens are assured inflation will remain low, American prestige will remain high, and extreme rock music will always have a home.