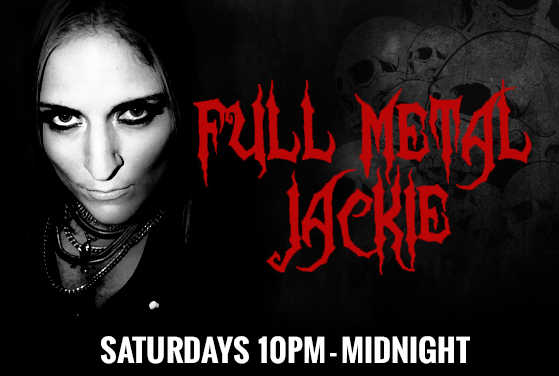 Full Metal Jackie is two hours of fist pounding metal from the frontlines hosted by Full Metal Jackie featuring regular interviews with many of metal’s biggest names, past and present. See more at fullmetaljackieradio.com

Full Metal Jackie began her radio career as a DJ at WSOU Pirate Radio, Seton Hall University’s legendary metal station. Instantly addicted to the excitement of life behind the mic, she graduated Pirate Radio (and Seton Hall), to become an on-air personality at WHTG (Neptune, NJ), and later at WDHA (Dover NJ).

Not content to limit her exposure to New Jersey, Jackie set her sights on bigger markets (and warmer climates!), making her way west to California’s gold coast. Establishing herself in Los Angeles, she learned the business side of radio and promotions while working for one of the music industry’s largest management companies. After a short stint as on-air host at San Diego’s 94.9 KBZT, Jackie landed the opportunity she had been working toward since her early WSOU days: host and producer of her own (and L.A.’s only) commercial heavy metal radio show, CHAOS on Indie 103.1. Working alongside other Indie 103.1 hosts such as Steve Jones (of the Sex Pistols), Henry Rollins and Dave Navarro, Jackie has quickly brought CHAOS to the station’s forefront.